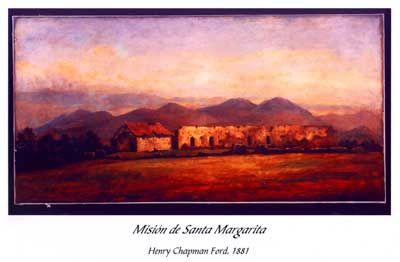 Shortly after Mission San Luis Obispo was founded, the Franciscan Padres realized they needed an “asistencia” nearby. By definition, an asistencia was “a mission on a small scale with all the requisites for a mission, and with Divine Service held regularly on days of obligation, except that it lacked a resident priest.”

The Santa Margarita Valley afforded an ideal location for an asistencia. It was nestled in the Santa Lucia Mountains and provided a warm climate; it was well protected from the coastal winds and had an abundance of rainfall. Four creeks crossed the valley and it was only eight miles from San Luis Obispo.


The exact date of the founding of the asistencia at Santa Margarita de Cortona is unknown but sometime between 1775 – 1800 is most commonly accepted. However, since the architectural style and building fabrics still evident at Santa Margarita are virtually the same as those at La Purisima, it would appear that the structures at Santa Margarita could be dated at 1787.

The asistencia was named after Santa Margarita de Cortona, an Italian saint, born 1247 in Laviano. Her story is one of a fallen woman finding her faith and redemption. She was allowed to join the Third Order of Saint Frances, receiving the seraphic habit in 1277. She died February 22, 1297 in Cortona, a province of Tuscany. Her body today is preserved in the Franciscan church at Cortona bearing her name. Benedict the 13th canonized her on May 16, 1728.


The Asistencia de Santa Margarita was mentioned in official records in 1790, and by then it was very important the Mission. In that year, a retired Spanish corporal, Francisco Cayelas, married to a Native American woman and applied for a land grant in the area. Governor Pedro Fages favored the request and informed Father Miguel Giribet at San Luis Obispo. Mindful of a provision in the Law of the Indies that such land must not be needed by the mission he protested in writing to the Spanish governor. Father Fermin Francisco de Lasuen, the Franciscan presidente, also intervened, pointing out that the mission was indeed “utilizing the place called Santa Margarita for many purposes, one of which was the raising and herding of swine.” The case lingered for some years until the viceroy eventually revoked the grant.

During the first precarious years, the huge rancho struggled through near famine but as time passed, thousands of cattle grazed the rolling hills and grain crops flourished. The records of Mission San Luis Obispo show that the Asistencia de Santa Margarita contributed large stores of wheat, grapes for Mission wine, hogs, sheep and cattle. The asistencia produced so much wheat that, in 1826 Mission San Luis Obispo commissioned the building of a two masted schooner to ship grain to other sites.

The proposal to elevate the status of Santa Margarita to that of mission was definitively squelched by Father Luis Gill who noted, in 1830, that recent earthquakes had inflicted effects on “all the walls of the home at Santa Margarita.” He wrote that three enemies that were beginning “to appear on the scene to prevent Santa Margarita from ever becoming a complete mission: earthquakes, decline of the Indian population and secularization.”

The Asistencia de Santa Margarita was important for more than its farming and ranching. The Asistencia served as a meeting and lodging place for the Padres making the trek between the Missions. (San Luis Obispo, San Antonio de Padula and after its founding in 1795, Mission San Miguel).

Numerous adobes and a stonewalled storage house with guestrooms and a chapel on a gentle rise were constructed overlooking Santa Margarita Creek. Huge boulders and clay tiles were used in the stone walled Asistencia building, which still stands today. It is a huge building, measuring 135 feet long and 32 feet wide at varying points. Interior stone walls divided the building. Inside, the chapel was 40 feet long and 30 feet wide. The eight other rooms were used for the visiting padre, the mayor domo of the Rancho and Indian workers, and the storage rooms of the granary.

Many guests visited the Asistencia throughout the abundant years. Because of larger quarters at the mother mission, most of the district’s entertainment and celebrations were held at San Luis Obispo. Santa Margarita Rancho expanded quietly and beautifully with comparatively little to destroy its serenity.

The end of the Padres pastoral dream came with Mexico’s independence from Spain in 1822. Pressures were put upon the new government demanding secularization of the churches and although the lands of the missions were understood to belong to the Indians (and the Padres held them as such), large ranchos were granted to the friends who aided in the Mexican cause in 1832.

The Asistencia has been rocked by earthquakes (most recently in December 2003) and swept by fires-including one that melted some of the natural silica in the rock, damage that is still visible today. Fr Gil y Taboada says in 1830, “all the walls of the house at Santa Margarita have been cracked by earthquakes.” In 1904 the Asistencia by a metal barn building and roof. Today the Asistencia is a California Historical Landmark (#364) but is on private property.