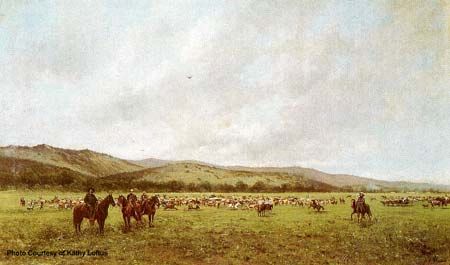 In 1832, the Mexican government offered California land to soldiers who had fought for Mexico with its War of Independence with Spain. The applicants had to be citizens of Mexico and Catholic. The Rancho Days of California and San Luis Obispo County started when the Mexican government awarded 35 land grants in San Luis Obispo County between 1822 and 1846.

A unique and ideological time began on these large California ranchos. The Dons (as the owners of the rancheros were known) were a carefree spirit. They loved life, the outdoors and horseback riding; living in a land of abundance that was isolated from the rest of the world. The Mexican cattle roamed the hills and were gathered only for the great rodeos when they were branded. These gatherings turned into huge fiestas with the vaqueros (cowboys) performing heroic feats of horsemanship. This life was especially true on the Rancho Santa Margarita, aptly called the “Queen of the Cattle Ranchos”.

Joaquin Estrada 1841-1860
Joaquin Tomas Estrada was born in 1815 in Monterey, Alta California (then capital of California) the third child and second son of Don Raimundo and Josefa Vallejo de Alvarado. The Estrada family was very influential in early California history. His older half brother, Juan Bautista Alvarado was serving as governor of California at the time and a maternal uncle served as General of the Army of Alta California.

On September 27, 1841, the Mexican Governor Manuel Jimeno granted 17,734 acres to 26-year-old Joaquin Estrada. The Santa Margarita Rancho was rated “first class” was taxed at a maximum premium for $1.25 an acre (‘second class ranches’ were taxed at $1.00 an acre).

Married to Maria de Jesus, Joaquin Estrada made his home at the adobe house, which he used as his ranch headquarters. Dudley Ross in his book “Devil on Horseback” tells of horse races that Jack Powers and other “bravos” had at Rancho Santa Margarita around 1858. Rancho Santa Margarita and Joaquin Estrada were famous for its huge rodeos and fiestas lasting several weeks. Rancho Santa Margarita became one the most famous ranchos for its elaborate fiestas and rodeos. Great feats of horsemanship by the vaqueros and caballeros (gentlemen) were common. A two-tiered viewing stand was erected by the creek, next to the arena for guests to watch the activities. In the evening, a grand Baile (ball or dance) was enjoyed after dinner. Once Joaquin Estrada brought a circus to the ranch to provide entertainment for his guests and one fiesta reportedly lasted a month.

Estrada devoted his time to raising large herds of Mexican cattle. With a growing family, servants and vaqueros living on the ranch, farming was done chiefly to supply food for the ranch tables. Cattle hides and tallow were sold and traded. Seamen referred to the hides loaded for shipment to east as “California Bank Notes”.

As the days of hide and tallow were waning, Estrada made much of his wealth in the cattle that were driven to the gold fields after the Gold Rush began in 1848.

In December 1846, a meeting was held at the Santa Margarita Rancho between Pio Pico (the last Mexican Governor of California) and General Jose Castro to discuss what could be done after the American Flag had been raised in Monterey, declaring Californian independence from Mexico. Later that same year Captain (later General) George C. Fremont came to the Santa Margarita Rancho and detained Joaquin Estrada and his Major Domo, Jose de Jesus Pico (Governor Pio Pico’s cousin) believing their allegiance was with Mexico. Both were released a few days later after promising to help Fremont keep order in the area.

While the Gold Rush sat off a demand for southern California cattle to be driven to the mines (for food) and ushered in a brief period of prosperity for the old Rancheros, including Estrada, this demand fell off in the latter half of the 1850's, and the expensive life-style enjoyed by men like Estrada could no longer be maintained. Against this backdrop, the State of California, established in 1850, chose to put the tax burden on landowners; this meant that a disproportional tax burden fell on the large landowners of southern California, like Estrada. The biggest financial burden that hit Estrada and old Californio rancheros was the demand placed on them by the Land Act of 1851, which required that they "prove" the titles to their Mexican land grants. This was very expensive (required hiring English-speaking Anglo attorneys) and so drawn out; taking an average 17 years for the final judgment to come down. In the meantime, expenses mounted and the rancheros like Estrada borrowed against their land, and finally, were forced to start selling it off. Estrada filed his claim before the United States Land Commission December 28, 1852. The Commission approved in 1854 and the District Court upheld the approval in 1855, but apparently not for the whole amount of property in Estrada's initial claim. He made an appeal of the Commission's findings in 1857, which was denied. A patent was finally issued to Estrada for Rancho Santa Margarita, April 9, 1861 for 17,734 .94 acres.

Joaquin Estrada was elected to San Luis Obispo County’s first Board of Supervisors in 1852. He also served as County Treasurer (1853-1854), County Recorder and County Auditor (1850).

In the journal, “Up and Down California" W.H. Brewer comments on May 4, 1861 of passing through the Santa Margarita area. "The mission of Santa Margarita was in ruins. It is the seat of a fine ranch which was sold a few days ago for $45,000. The owner, Don Joaquin de Estrada, lives now at Atascadero Ranch, where we camped. This last ranch is all he now has left of all his estates. Five years ago, he had sixteen leagues of land (each league over 4,4000 acres, or over 70,000 acres of land), 12,000 head of cattle, 4,000 horses, etc. Dissipation is scattering it at the rate of thousands of dollars for a single spree. Thus the ranches are fast passing out of the hands of the native population." It seems that once Joaquin Estrada received clear title from the Land Commission, he promptly sold to the Anglos, Martin and Mary Murphy.

Patrick Murphy 1861-1904
In 1861, Joaquin Estrada sold the Santa Margarita Rancho to Martin and Mary Murphy for $45,000. The Murphy’s had come to California in 1844 by way of the Donner Pass and settled Mountain View, Santa Clara County.

Their son, California National Guard General Patrick Washington Murphy (born September 11, 1840 in Missouri), took over running the ranchos of Santa Margarita, Atascadero, and Assuncion, comprising about 70,000 acres. Later, Cojo Rancho, near Lompoc added another 9,000 acres. Under Patrick’s reign, the Ranchos began to prosper again with large herds of Mexican cattle. At one time, the ranch was said to have counted 200,000 cattle, many of them completely wild.

He continued the early California Rancho hospitality of large fiestas and rodeos. Many of the same vaqueros who worked for Joaquin Estrada stayed on and worked for Murphy. He was noted for his generosity to all. He allowed many squatters on the Rancho to farm and sharecrop. Due to a growing population in the valley, Murphy had his friend, Billy Farrell, run a store in one of the adobe buildings at the headquarters. The white clapboard building with its adobe walls underneath still stands today.

Politically a member of the Democratic Party, Murphy served in the State Senate 1865-1869 and 1877-1879.  In 1880, he was elected to the State Assembly from San Luis Obispo County and served one term.  He was one of the originators and directors of the San Luis Obispo Water Company and Bank of San Luis Obispo. Most importantly, P.W. Murphy was primarily responsible for the Southern Pacific Railroad using the current coastal route.

Patrick Murphy gave the right-of-way through the Santa Margarita Ranch to The Pacific Improvement Company, the Southern Pacific Railroad’s land company. The town was laid out in lots 25 feet wide and 150 feet in length, and thirty-two lots to a block. The principle streets ran parallel with the railroad are 100 feet in width and cross streets 75 feet. In the fashion of the time, the streets were named alphabetically with cross streets named for Patrick Murphy’s favorite nieces. Pacific Improvement Company advertised lots for sale in the new town of Santa Margarita. On April 20, 1889, Patrick Murphy and his vaqueros hosted a huge barbeque and picnic to promote the selling of the lots. 102 lots were sold the first day but a downturn in the California economy forestalled a great success.

Patrick W. Murphy died November 1, 1901 in San Francisco after a brief illness. He is buried in San Jose.

Once again, a lavish lifestyle and the drought of 1899-1900 forced the sale of the great Santa Margarita Rancho in 1904 to the Fernando (Frank) Reis family.

UP and Down California: in 1864-1866 by William Henry Brewer, University of California Press 1966

Protected Valley, The Story of Santa Margarita by Virginia Williams, 1966